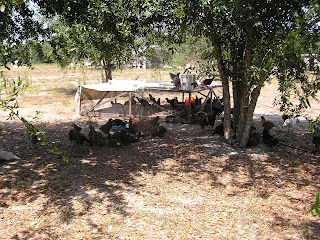 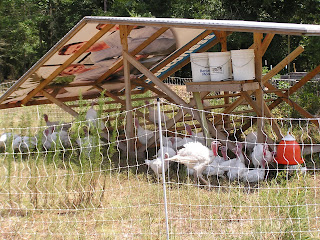 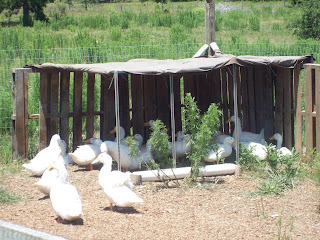 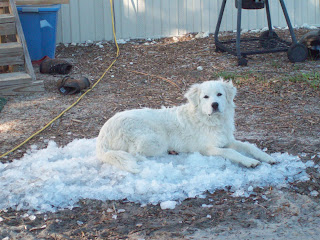 Was last summer this hot? Laughing Chicken Farm has become panting chicken farm in the mid-afternoons. Thankfully, we do cool off at night to a nice, less than 60ish temp. But in the heat of the day I've seen our thermometer read over 100. That being said, we are doing our best to keep everyone comfortable and hydrated. Our well water comes from an underground spring pocket so when I refill the animal waterers in the afternoon, the chickens splash and dunk their heads in it. They love to lounge under the hanging waterer and lay on the damp ground.

Today we moved the first two batches of turkeys out to the TRV (Turkey Roosting Vehicle). One and two at a time, Bill and I carried them by hand across the pasture to the new corral. This all started around 11am when the sun is almost full strength. What were we thinking? Too many trips later, covered in sweat, turkey poo and feathers, we got all 30 into their new shady quarters. Of course they just gawked at us and stood in the sun, but slowly they made their way under the roof and into the shade. The first group of 15 has about a month to go before harvest day, but I think they are over ten pounds already.

Our flock of new layers are doing well, but not blending together as we had hoped. We brooded 25 of them separately two weeks apart, and they have decided to stay segregated. It's like rival gangs. The big girls take over the watering station and hang out by the feeders. They peck the little ones on the heads when they get close so I have to set up different watering and feed troughs. At night, the little girls sneak in and join the flock, but then run out as soon as daylight comes. We had them surrounded by the poultry net, but the little ones could fit through the holes, so now they all are running around free. At least they are getting lots of foraging area. They haven't found the garden yet, thankfully.

Speaking of the garden, I pulled up what I thought were sorry little failed carrots only to find that several had actually gotten big enough to bite. We've never grown carrots before. I haven't tasted them yet so I'm not sure if they were a success or not. The heat has withered and bolted many of the garden's first plantings. I'm thinking I'll save the seeds so I let the mustard, cilantro, and arugula go to flowers. The ducks are sharing the space too so they get to enjoy the plants when they are pulled up. I tossed them green bean plants today. They stay cool with lots of water to dunk in and shade to get under. Most of their quacking is morning and afternoon when the day cools off. These are Giant Pekins. Sure they're beautiful, but dumb as dirt. Chicken Little should have been a duck because they all run around and think the sky is falling! I've already started a small flock of Muscovys. Everyone I've talked to about it says they are much better to manage, and actually get bigger then the Giants. Plus they have the added bonus of hatching out their own babies. Can't wait for that one!

Of all the other animals here, I think Lilly has the best idea for cooling off. Every Tuesday and Wednesday after processing and packing the chickens Bill dumps the ice from the coolers on the ground. Lilly rolls in it, lays on it, eats it and throws it in the air. She makes it look so good, I sometimes want to join her. So I've included a picture of "Lilly on Ice" and hopefully it will make facing the heat easier for all of us.
Posted by Laughing Chicken Farm at 3:24 PM No comments: