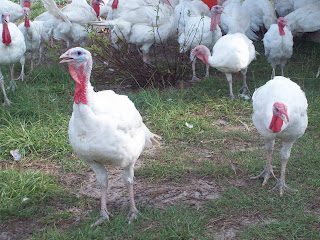 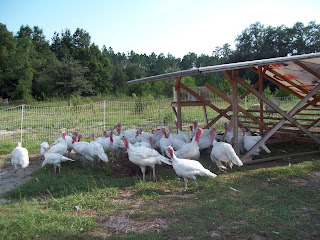 When we lived in the city, the fourth of July was a night filled with enough booms and crackles and smoke to fill the neighborhood. Even though we lived only five miles from Clearwater Beach where the BIG fireworks go off, that didn't seem to stop everyone on our block from indulging their inner pyro and lighting off their own private display. When our kids were little, we just walked down a few driveways and watched the neighbors set off $100.00 worth. So it didn't bother us at all when our new neighbors in the country decided to have an impressive sky show of their own this year. We just turned up the volume on the tv and enjoyed our movie. However, if we had taken a peek outside we would have seen 42 out of 43 turkeys trample the electric netting, and take off into the night.
The thought did cross my mind during the movie that we should at least check on them. Bill casually said that there couldn't possibly be any danger of predators with all the noise and flashing lights going on. He was right. No coyote, fox, raccoon, bobcat, panther, or armadillo were anywhere near our place. At around 11pm our neighbors had finished and something prompted Bill to grab a flashlight. That's when I learned of the only one remaining turkey in the corral. We quickly passed out flashlights. Thankfully our son and daughter-in-law were with us so we had extra help. We scattered into the darkness criss-crossing our beams of light. Bill and Ben found the first 16 birds bedded down near the clothesline. My heart sank. I didn't think the flock would separate. I hoped we would recover more.
We scattered again and I headed toward the woods. There, in the thick grass and weeds were more birds. When they saw the light, they lifted their heads and started cooing. I quickly counted. Yes. All were there. Now, how does one pick up and move 42turkeys in the dark without scaring them, injuring them, or injuring ourselves? A third of them already weigh close to 20lbs and can kick and flap with more strength than you would expect.
Bill brought the pickup truck in slowly. We turned out all the flashlights except one. Danielle, our daughter-in-law held that one as we slowly moved through the flock. One at a time we loaded about ten into the bed of the truck. Micah, our youngest son climbed in, and he and I held our arms around the birds while Bill drove us back to the turkey net. It took about four trips to get them all back in. Then we realized that Lilly, our new puppy was missing too. She would have been with us "helping". Once again, the flashlight brigade scattered into the darkness calling her name. She had either hidden herself very well, or was missing from the property. I had seen Lilly's stubborn streak before, so I knew there would be no coaxing her out of hiding. I'd have to wait until morning. I went out at dawn the next day and was greeted by her smiling face. Thank God she was okay. She seemed unaffected by the previous nights escapades and started the day with her wagging tail like always. Bill and I breathed a prayer of thanks and a promise to ourselves to be prepared for next year.
Hope your 4th of July was spectacular!
Posted by Laughing Chicken Farm at 5:08 PM No comments: