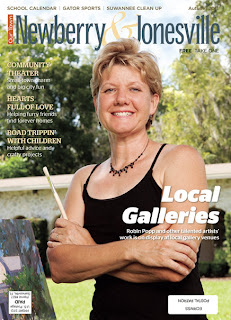 Just found out that they published a pic of me on the cover of the Newberry/Jonesville Magazine today. If you look closely, you can see the silver bracelets Wonder Woman let me borrow for the picture.
Posted by Laughing Chicken Farm at 3:34 PM 2 comments: 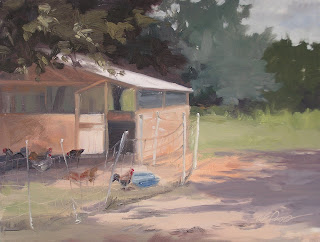 The new coop is finally finished. (Thought you would enjoy a picture of the painting I did of it rather than a photo) The nest boxes are in, the perches are up and the door has a latch. Filling it with chickens has not been as easy as we thought. Not all birds go into coma-like states at night, thankfully chickens do. Maybe it's because they can't see well in the dark. Whatever the reason, it give us the advantage after the sun goes down.

Bill and I became chicken ninjas. We dressed in black, grabbed a flashlight and a carrying cage and headed where we knew they would roost. Some were in the old shelter, some were high up in the surrounding trees. Luckily, the moon was nowhere to be seen. Bill shined the light just enough to see body shapes, then I grabbed them one at a time from their perches. They screamed and squawked as I walked them over to the truck. Bill clipped wing feathers hoping that would be enough to keep them from getting over the electric netting.

The ones in the trees were a little trickier. Bill set the ladder under them, I weaved through the branches, reaching for two legs. Both the chicken and I would come down off the ladder with leaves, twigs and feathers flying. For two hours we stole the birds from their roosts and placed a total of 142 inside the new shelter. They squawked some more when we unloaded them and they had to figure out where the rest of the night would be spent and who would roost next to whom.

The next morning, we opened the door. It seemed that there hadn't been any fighting. The two groups of chickens that had fought like crazy were now drinking out of the same waterer. We even opened the door to the older hen's section and they were sharing nicely too. Wow. It looked like the plan worked!

Then, the clever little devils started taking a jump at the electric netting. They flapped and climbed at the same time and about 15 birds got out again. Now they were all the more wary and harder to catch. We've been catching who we can and clipping the other wing. I caught one yesterday that already had two wings clipped. There's little more I can clip that won't require an operation and stitches!

So...we are still hunting eggs in the grass, only the dogs are hunting them too and they've figured out all the good hiding places. Most of the time I find empty shells. The ones inside the new area are giving us about 7 dozen a day, and we can find all of them, so all is not lost. I'm thinking maybe the only way to deal with the rebellious is put on my ninja costume again and keep them in solitary confinement. Maybe they'll be reformed.
Posted by Laughing Chicken Farm at 1:00 PM 1 comment: