The thief has been seen! 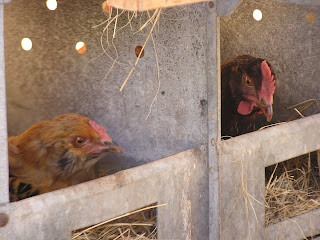 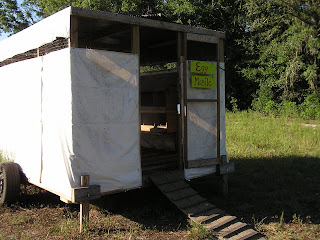 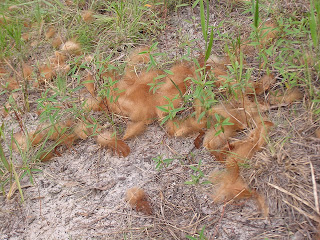 Lately we had some sad events here. Something killed one duck, then three more ducks. Not just for food, mind you, but for fun and left the victims lay in the grass. Then, the same something came in broad daylight while we were at church and massacred four chickens. Feathers were everywhere. The casualties were heavy. I was angry and filled with a feeling of helplessness. So much for our "vigilant" guard dogs. Worthless.

Bill took a walk into the woods the next day and spotted a very large raccoon running away. He must have developed a taste for our chickens and was coming in for more. We moved the Egg Mobile and we are taking the dogs down into the woods at different times during the day. We may have scared him off, but I dare not get complacent. The electric netting is going up as quickly as we can get the grounding stakes in the ground. It's amazing how much impact losing four layers has made on our egg production. Four less eggs a day adds up to more than two dozen a week we won't be collecting. It makes me realize how valuable each creature is to the whole system. On a happier note, Our remaining two female ducks are doing fine after getting over the trauma and have begun to lay. I set them up in a new house in the garden, but the first opportunity they had they waddled back to the old cage and put themselves inside. I guess that's were they'll be staying for now.
Posted by Laughing Chicken Farm at 2:14 PM