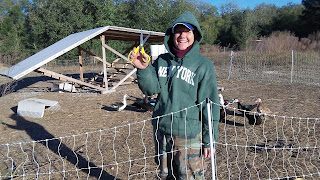 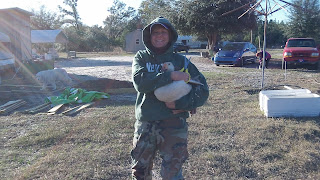 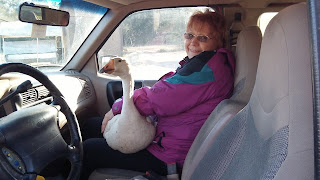 "We brought you something," my aunt said with a big smile. I looked in the back of the truck and saw four heads with long necks and big eyes. Four big geese looked back at me. They were just as surprised as I was.
Of course I thanked her, I mean, when do you ever get four big geese for a present? My next thought was, "Where am I going to put them?"
My aunt seemed to think they would be fine in the corral with the ducks for now. At least until they settled in. Then she said I could just let them roam around the farm and they would be happy. We found a container big enough for them to have a "pond". So far so good.
The next day we received a giant goose egg and I thought this was going to be a good relationship after all. Well, that's what I thought until on day three, big goose number one decided to spread his giant wings, glide over the electric netting away from the ducks, and settle on his own in the north end of the property. Geese two, three, and four soon followed. Well, maybe they know where they live now, I thought. My mom and Danielle, my daughter in law, were staying over, Bill was out of town, and I figured the geese could do their own thing. But then we had trouble. The four wild things did NOT want to stay on Laughing Chicken Farm property. In fact they were flying over fences like crazy and I could just barely see them in the neighbors field.
"Get in the truck!" I yelled and we three girls drove up the driveway. I parked and jumped out, running through blackberry bushes and cactus. I caught the first goose and handed her to my mom. I asked her to hold on tight and sit in the truck with her. Poor mom's shoes were full of cactus spines and sand spurs. Without complaining, she held the goose on her lap. Danielle and I could only catch one more goose. The more we ran after them, the farther away they flew. We all rode back to the house with the two geese in our arms. I rode on the tailgate while Danielle drove and the goose in Mom's arms pooped all over her lap while uttering deafening honks the whole way home.
Danielle took the pictures while I clipped the wing feathers on the two we'd caught so they would stay behind the fencing. We could hear the male calling while the females called back all through the night. I felt so helpless.
Thankfully, the next morning the male had made it back. I opened the fence, and he walked in. I was just glad he didn't get eaten during the night. After talking with my aunt, we decided it was best to find them a new home. A friend came and picked them up and off they went down the road again in the back of a pickup truck, necks stretched out and eyes wide with surprise.
Posted by Laughing Chicken Farm at 9:06 PM