Okay, so Bill and I get up before dawn on Monday morning, crawl out of bed, and reach for the coffee. Bill looks out the window and says, "Hey, the brooder light is off." It was a cool morning, so we agreed that the youngest ones needed a light. He heads out to turn it on. As Bill is walking to the brooders, he turns his head to the right and sees a flock of large white birds coming his way. There is something familiar about these large white birds. Wait a minute, aren't these the group of juvenile turkeys we just moved into the nets the night before? They aren't supposed to be up here by the house. Yep, you guessed it, the little varmints were out having a great time, probably partying all night long wandering the farm. 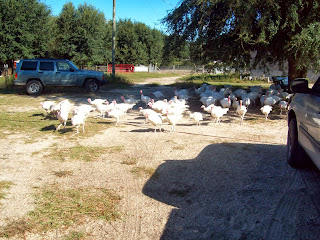 It's Monday, it's butchering day, and everyone needs water and feed before we get started. I could see the frustration as Bill threw his hands in the air. The turkeys on the other hand were happily picking their way through all the new grass by the house and working their way to the bigger, older flock of turkeys who by this time began to notice what was going on.  (You can see them in the background of one of the pictures. )

The young group of turkeys obviously didn't want to be in the housing we put them in last night. They had explored that area and now were bored. We had used a single net around a portable laying house, but one electric net wasn't enough. The only other one we had available was shorter in height and had bigger holes. It was currently around the garden to keep the sheep out.

"We have to buy more nets," Bill said.

"They'll go right through it," he replied.

"Let's put them around the RV. Maybe that will give them enough to explore."

What else was there? We could take a chicken net, but then we'd have chickens everywhere. Bill reluctantly agreed.  He and I gathered up the bigger net and the smaller net and walked them over to the RV. There were plenty of weeds and grass and things to look over and under around the RV. This would make a good turkey place.

The turkeys followed us as we set up the nets, added their food and water, brought up the wiring and hooked it all up the the electric hot wire. We herded the stragglers in and shut the gate. Whew. Done. Then as soon as we walked away, so did they. Electric shmelectric. They didn't feel a thing. Over and under and through the net they came.
(This is a picture of where they're supposed to be. Someone got left behind.) 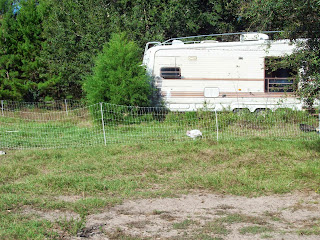 Okay, now we were ready to butcher THEM today. There was nothing else we could do to contain them. The day had to get started with or without them where they were supposed to be. At least they wouldn't leave the farm. (We'd hoped.) 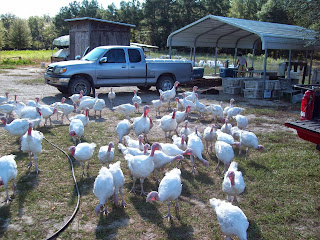 Evidently, they just wanted to be close to the action. They watched us process 70 chickens and we used the carrying cages as a barricade so they wouldn't come into the actual butchering area. When they started to bed down under the shade tree, Bill decided to try to get them into the netted area again. This time he took off running. They all stood up and started running too. They ran after him and followed right into the enclosure and he shut the gate. Suddenly the food and water we had put there looked enticing. They decided to stay and have lunch. Bill hopped over and carefully walked away.

What goes on in a turkey brain? I couldn't say. Steve, a friend who helps on processing day, said they had imprinted on us. I guess that must be it. I know turkeys are not as dumb as people say they are. So far, they've decided they like the new home. Let's get those new nets ordered fast.


Posted by Laughing Chicken Farm at 9:14 AM